Atomic Spectral lines frequencies of light for chemical elements can be heard by bringing their octave down to audio window.

The atomic spectral lines for Hydrogen are shown here in a range from high ultra-violet to low infra- red, the visible region of the electromagnetic spectrum

The frequencies of light corresponding to each fine spectral line are presently thought to be a form of Energy = constant (Multiplied by) Frequency, So Energy really equals frequency. And from Einstein's equation from the theory of relativity E = m*c^2, energy and mass are the same proportional thing, so frequency is mass also. Modern Quantum Theory a century before the milennium had the Great Scientist Neils Bhor postulate a theory of electrons jumping energy states in abstract rings of orbit, giving a release of their orbital energy in the form of a quantized frequency of light. 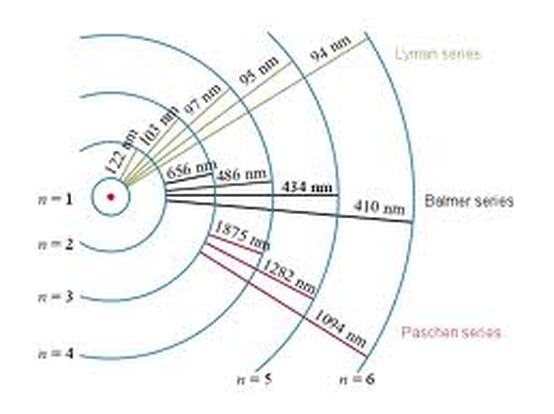 So these frequencies of light can be halved and halved again and again to have frequencies in audible range, just like hearing the same note but many musical octaves lower. But remembering that speed of light, c = frequency (multiplied by) wavelength, then frequency = c/wavelength ( in nanometers)


Sound of Carbon, Nitrogen, Oxygen , Hydrogen & ionized states:-
And next is a composition incorporating all the states of Hydrogen, Carbon, Nitrogen , Oxygen in the form of a musical piece :

These are actual sounds of the atoms and molecules, atomic, molecular combination corresponding to the emission absorption spectrum The spectral lines were taken from a database in a range from highest limit ultraviolet to infrared, the visible spectrum being in audible range. The spectral lines frequencies of light from the elements H,C,N,O and the particular ionized states were compiled using spreadsheet software. An equation was created as a long sum of many sine waves and copied,pasted to a music package that supported equation expressions. The first sequence of this piece is heard, 4 chords corresponding to the ground, un-ionized state for chemicals hydrogen, carbon, nitrogen, lastly oxygen. The sequence is repeated a few times, then develops into a kind of metallic crescendo when the first, second, third, fourth, etc, ionized state is played for a particular chemical. Hydrogen exists in only one state, whereas C,N and O have a number of ionized states.
The Voyager probe recorded radio waves from the planets mercury , venus , earth , mars , jupiter , saturn , uranus , neptune . The radio electromagnetic signals were transformed to audio sound waves like eerie space celestial music.